No. The Great Seal of the United States is not a Masonic emblem, nor does it contain hidden Masonic symbols, nor was it designed by Masons. While the all-seeing eye of providence is a common symbol used by Masons and others to represent the omniscience of God, when combined with a pyramid it has no official Masonic meaning. (Some lodges have subsequently used the eye in the pyramid as a design element, but it has never been adopted by any grand lodge as a symbol.)

The Great Seal of the United States grew out of three separate Congressional committees. The first of 1776 was composed of Benjamin Franklin, Thomas Jefferson, and John Adams, with Pierre Du Simitière as artist and consultant. Each of the three committee members proposed an allegorical design: that of Franklin, the only known Freemason involved at any stage of the design process, was Moses at the Red Sea with Pharaoh being overwhelmed; Jefferson’s was Israel being led through the wilderness; and Adam’s, the choice of Hercules between the rugged path of virtue and the flowery meadow of Sloth.

Du Simitière, the committee’s consultant and a non-Mason, contributed several major design features that made their way into the final design of the Great Seal: the shield, “E Pluribus Unum,” and the eye of providence in a radiant triangle, as shown in his proposed seal. The eye of providence on the current seal thus can be traced to a non-Mason consultant to the committee.

Congress declined the first committee’s suggestions as well as those of its 1780 committee. Francis Hopkinson, consultant to the second committee, had several lasting ideas that eventually made it into the seal: white and red stripes within a blue background for the shield, a radiant constellation of thirteen stars, and an olive branch. Hopkinson’s greatest contribution to the current seal came from his layout of a 1778 50-dollar colonial note in which he used an unfinished pyramid in the design. 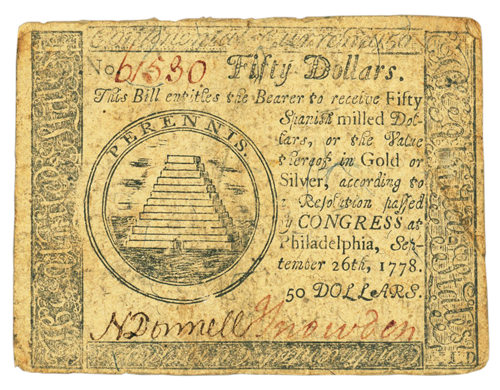 The third and last seal committee of 1782 produced a design that finally satisfied Congress. Charles Thomson, Secretary of Congress, and William Barton, artist and consultant, borrowed from earlier designs and sketched what at length became the Great Seal of the United States.

The “Remarks and Explanations” of Thomson and Barton are the only explanation of the symbols’ meaning. Despite what others may believe, there’s no reason to doubt the interpretation accepted by the Congress. “The Pyramid signified Strength and Duration: The Eye over it and the Motto [Annuit Coeptis, He (God) has favored our undertakings] allude to the many signal interpositions of providence in favor of the American cause.”