The instrument is a draw knob design with two keyboards (manuals) and a pedal keyboard with a total of 1,417 pipes. The lower keyboard is called the Great Manual and includes a complete principal chorus, representing the traditionally-recognized pipe organ sound. This chorus in annotated with flute and string sounds (stops) as well as a reed stop called the Trompette. The Great Manual is further highlighted by a large mixture of high pitched pipes that crown the principal chorus, chimes from the original Kimball Organ, and finally, a very powerful Festival Trumpet which completes the full pipe organ sound.

The upper or Swell Manual includes solo and complimentary sounds to the Great Manual and is smaller in scale. It features complete flute and string choruses as well as a beautiful solo oboe stop. Finally, there is a harp stop from the original Kimball Organ.

The Pedal Manual includes large principal and flute sounds as well as a very large Trompette which underpins the full pipe organ sound. Many stops or sounds that are available on the manuals are also available on the pedal. 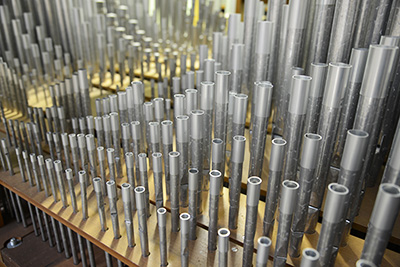 Except for the Festival Trumpet, all the pipes are located in an organ chamber within the dome. Volume is mechanically-controlled by a series of louvers facing into the room that can be opened and closed by the organist through controls on the console. There are many other features on the organ to assist the organist in changing sounds and volume that can be operated by the hands or the feet. These include the many buttons beneath the manuals and toe studs above the pedals which can be set to provide the many combinations of exquisite and majestic sounds this fine organ can produce. 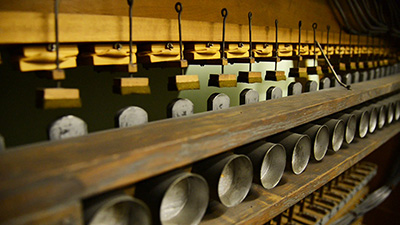 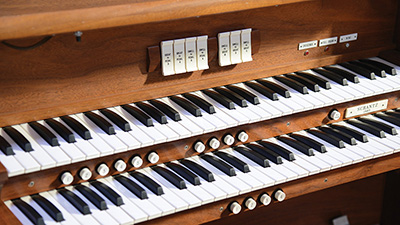 In 1873 A. J. Schantz founded the Schantz Organ Company in Orrville, Ohio. It has the distinction of being the largest and oldest American pipe organ builder managed by the founding family. A. J. Schantz originally built small parlor organs more commonly referred to as reed organs and he used his musical and creative genius to expand into pipe organ construction. The company expanded in the early 20th century to include his sons, and the quality of their instruments helped them successfully expand in the Ohio region. The third generation excelled in the skills of their trade and eventually took over management of the company. These family managers expanded the company and developed the national reputation they have today. The work continues with the fourth generation of the Schantz family and includes projects ranging from restoration of existing instruments to the construction of entirely new pipe organs, and in size from modest organs of a few ranks of pipes, to complex designs for some of the largest churches, cathedrals, and public spaces in the world.

If you are in the area, please come see (and possibly even hear!) our magnificent organ for yourself.

For the latest tour information, please visit our Hours of Operation page.