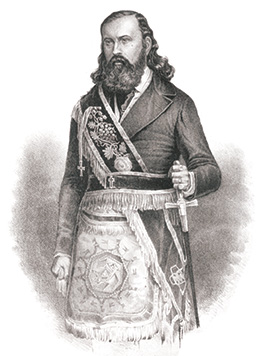 Robert F. Gould and George W. Speth (founding members of Quatuor Coronati Lodge 2076 in London, the premiere research lodge) informed Pike that his “Symbolism of the Blue Degrees of Freemasonry” was the most important work of the kind they had ever studied.

If you’re familiar with early forms of the Scottish Rite’s rituals, you’re likely aware that in many of the degrees the principal officer was often called puissant, an antiquated word meaning “greatly influential” or “powerful.” Perhaps the first time I encountered it was when I was in college. There’s a line in Shakespeare’s play Henry V, in which the question is asked, “Trail’st thou the puissant pike?” Although the original meaning of the phrase is “Do you carry a powerful spear?” I’ve since reinterpreted it in a Masonic fashion: “Are you following the powerful Pike?” My answer, of course, would be a resounding YES! As Scottish Rite Masons we indeed follow Albert Pike’s lead. Admirers of Pike’s Masonic work recognize him for his unmatched devotion as “that master genius of Masonry,” according to Joseph Fort Newton in The Builder (January 1914), who “found the Scottish Rite in a log cabin, and left it in a temple.” For many years Pike was principally known only as the author/compiler of Morals and Dogma, or as the author of the rituals of the Supreme Council, 33°, SJ. Few knew about his Book of the Words or that he was the editor of the 10-volume Bulletin of the Supreme Council, and fewer still realized that he was the author of literally hundreds of other works, catalogued in Ray Baker Harris’s Bibliography of the Writings of Albert Pike (1957). Almost 30 years ago, after I obtained Harris’s Bibliography, I became intrigued by its final entry: an unpublished manuscript entitled, “The Symbolism of the Blue Degrees of Freemasonry.” On the manuscript’s spine was the word Esoterika, curiously spelled with a k. Written in 1888, there were only two manuscript copies in existence: one in the archives of the House of the Temple, the other was sent by Pike to London. From its description I knew I had to read it. So, about 25 years ago, I traveled from my home in McAllen, Texas, to DC to meet with Ill. Reynold J. “Dick” Matthews, 33°, then Grand Archivist. Ill. Matthews had agreed to let me read the manuscript—provided I do so sitting in a chair next to him in his office. After the second day, he moved me to the Reading Room of the Supreme Council’s Library. 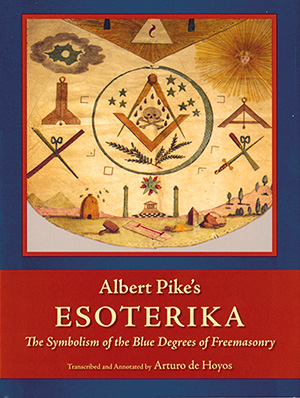 As I read the text I concluded that Esoterika was the most cogent and intelligent exposition of Blue Lodge symbolism I had encountered. I wasn’t alone in this opinion. Two of England’s greatest Masonic scholars, Robert F. Gould and George W. Speth (founding members of Quatuor Coronati Lodge 2076 in London, the premiere research lodge) informed Pike that his “Symbolism of the Blue Degrees of Freemasonry” was also the most important work of the kind they had ever studied. In his introductory remarks Pike discouraged the distribution of copies by “anyone who is not fit and qualified to teach and instruct his Brethren, and who does not propose to use it as their teacher and instructor.” This gave me the idea that with proper preparation, an introduction, annotations, notes, and appendices, the book could be made available. After discussing the matter with Grand Commander Seale, the Scottish Rite Research Society printed the book in 2005. Esoterika has since become extremely popular among Masonic students, and it is now the textbook for the first component (with accompanying quizzes) of the Supreme Council’s Master Craftsman education courses. But the book was destined for an even larger readership. In the past couple of years Bro. Voja Jovanovic, of Belgrade, and MW Carlo Rognoni, Grand Master of Panama, approached me with the idea of translating Esoterika into their native languages. These have now become realities. Bro. Jovanovic translated the work into Serbian, while the Spanish edition was translated by Bro. Marco Cortés Azofeifa, in conjunction with MW Rognoni and myself. The editions are near perfect copies of the original in looks and layout. The Serbian edition includes an additional biographical section on Pike, written by Robert Freke Gould, while the Spanish version even includes translated chapter title pages which emulate those of the original artwork! This past April, at the Grand Lodge of Panama’s one hundredth anniversary, I was happy to present an address on Esoterika as the book was released (it was also a gift to visiting dignitaries) and, this June I was the guest of the Regular Grand Lodge of Serbia, where I was invited to speak and sign copies. For information on purchasing the Spanish edition write to glp@granlogiadepanama.org, and for the Serbian edition, write to vojajova@yahoo.com. I have occasionally wondered how Pike would fit into Masonry today, and if his genius still would be recognized. But of course, he does continue to fit in and be appreciated, perhaps even more than in his own time. His works continue to inspire, and they are more widely available now—and in more languages. Today, more Masons than ever are following our “Puissant Pike.” The text of this article originally appeared in the September/October 2016 issue of The Scottish Rite Journal—available online and via the free app for Apple and Android devices, just visit your preferred app store and search “Scottish Rite Journal.” Image Captions/Credits: Drawing of Albert Pike: Archives of the Supreme Council, 33°, SJ, USA
I Agree