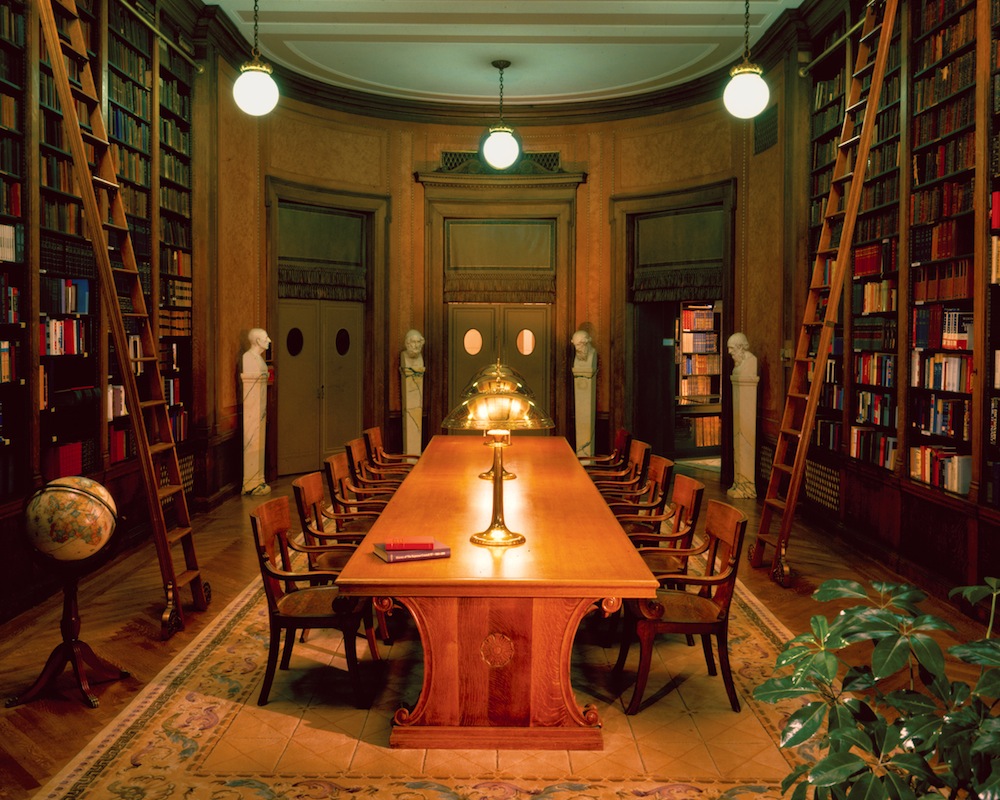 The Library of the Supreme Council is being used daily by patrons who live in the neighborhood. They using the library not only to do Masonic research but also as a beautiful and quiet space to study. This year, the reading room was featured on the local Washington, DC informational web site, DCist, as one of “12 Places To Turn Into A Temporary Office (That Aren’t Coffee Shops).”

One such person who likes working in the reading room is Ms. Katie Mastin. A freelance writer, she currently is working on a novel and says she is “tremendously grateful for the chance to write in the beautiful temple library. What an opportunity!” Another frequent visitor to the Temple library is Ms. Karen Solit, who has spent a number of years doing research on Robert Burns in its Burnsiana Collection assembled by William Robertson Smith. In 1880, the Library of the House of the Temple became the first library open to the public in the District of Columbia. It a tradition we proudly continue today.

Ms. Karen Solit, one of our regular researchers, says, “William Robertson Smith was employed by the United States Botanic Gardens from 1853 until his death in 1912, most of that time as Superintendent. More importantly, Smith is credited with collecting – volume-by-volume – America’s largest library focused solely on the work of the poet Robert Burns! In 1853, Smith brought with him to America a love of both his native Scotland and of Burns. Throughout his life, Smith held the deepest affection for the poet. He claimed that he owed all that he was worth to the writings of Burns, and that the poet’s influence on mankind could never be fully estimated.”

Although Smith did not have the funds required to buy all of the rare editions that came to his attention, he was often able to add to his collection through numerous gifts from prominent people throughout the world, in particular industrialist Andrew Carnegie. It was with Carnegie’s help that Smith was able to amass one of the finest “paper monuments to Burns” in the world.

As the friendship between Smith and Carnegie grew, Smith expressed his concern about the future of his library, fearing that the work of a lifetime would be scatted after his death. Carnegie agreed to oversee the collection and in fact helped find a home for the Burns Library at the House of the Temple. So, for over 100 years, a knowledgeable staff has lovingly cared for Smith’s collection of Burnsiana.

Also housed in the House of the Temple are over 60 scrapbooks filled with articles collected by Smith. The articles, mostly excerpted from local newspapers, are either about the United States Botanic Garden or about Freemason Robert Burns. Many articles focus on Smith’s collection of Burns’ work, though many are about the celebrated poet himself. Ms. Solit says of her frequent visits, “It was the scrapbooks that brought me to the Temple where Larissa Watkins (assistant librarian) patiently assisted in my work. The scrapbooks have been invaluable in the completion of my work on William R. Smith and his role in the history of the United States Botanic Garden. And Robert Burns!”