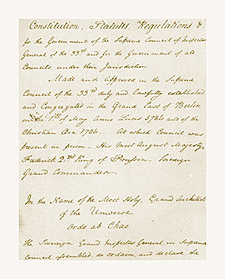 Our most frequently asked question is, “Did the Scottish Rite begin in Scotland?” The Scottish Rite actually came to the United States by way of France. There is evidence of “Scotch Masons’ Lodges” dating back to 1733 in England; and there were also predecessors such as the “Adonhiramite Rite” (ca. 1781) which included many degrees that ultimately became part of the Scottish Rite. Yet, it was not until 1763 and the creation of the “Order of the Royal Secret” by Stephen Morin of France, that the ritual we practice today began to coalesce into a form recognizable to a modern Scottish Rite Mason.