“In the Minneapolis Valley, we do all twenty-nine Scottish Rite degrees twice a year,” according to Minnesota Mason Tony Krall. “Typically, we start with a spring class in early January and have a degree accompanied by dinner and educational sessions every Thursday night. We generally go through the 29th or 31st Degree and then start a one- or two-day reunion. This year we had twenty-three brothers joining the Scottish Rite in the ‘long class,’ which starts in early January. We had eight additional members petition to join the two-day class, which started with the 4th and 14th Degree on Thursday, April 25, and concluded with the 18th, 30th, and 32nd on April 27.”

Unfortunately, due to the untimely death of the Minnesota Grand Master, the 32nd Degree was rescheduled for May 2. The few brothers who were unable to attend due to the rescheduling of the degree journeyed to St. Paul for their reunion on May 10 and 11. Both Valleys, incidentally, have been using the Double Eagle program, with Scottish Rite liaisons to each lodge in their area. They attribute their larger than normal classes to these efforts.

Brother Krall finally notes that “the spring class then concluded with our ‘Scottie Awards’ or worker’s dinner on May 4. We present Academy Award-style trophies to the brothers who have been outstanding over the last year. There are for categories such as Best Supporting Actor, Best New Actor, Best Director, and Degree of the Year. Yet all in the group of dedicated Masons who have chosen to make the Scottish Rite the next step in their Masonic journey are ‘winners’ in becoming Sublime Princes of the Royal Secret!” 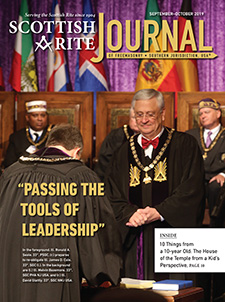