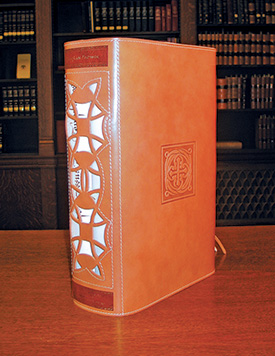 Photo: The two volumes of Processus Contra Templarios in their tan leather case. “Thanks to two generous donations, the library acquired the magnificently bound volumes of the Processus Contra Templarios (The Trial of the Templars) published in 2007 by the Vatican Secret Archives. This volume was translated into Italian and English and is a facsimile of the coerced confessions of 72 templar knights to a commission appointed by Pope Clement V from June 28 to July 2, 1308. These extraordinary and rare books, of which only 799 copies were printed, are displayed prominently in a special case, adding a distinct air of beauty and history to our Library.” 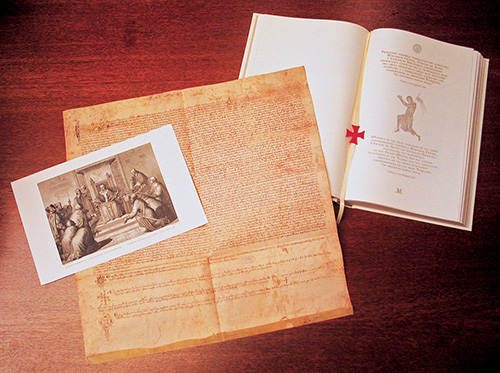 Photo: The English and Italian Translation showing its bookmark, the facsimile of the Chinon Parchment, and one of the engravings from the book. “The first volume of Processus Contra Templarios was generously donated by Illustrious Hoyt Samples, 33°, Past Sovereign Grand Inspector General (SGIG) in Tennessee, and his wife Mitzi in 2008. Ill. Robert W. Cockerham, 33°, SGIG in Missouri, acquired the 2nd Volume of this impressive tome and thoughtfully donated it to our Library to complete the collection in 2009.” 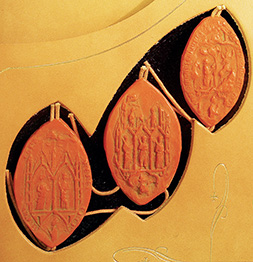 Photo: Three wax seals from the case of the Templar book. The center one is that of Cardinal Pierre de La Chapel, one of the three papal commissioners who examined the Templars. —From Jeri E. Walker, A Guidebook to the House of the Temple: The History, Architecture & Symbolism (Washington, DC: Supreme Council, 33°, SJ, USA, 2015). (Photography: Elizabeth A. W. McCarthy)
I Agree