If you have ever been to the House of the Temple, you know that we have tons of artifacts housed within the building (many of which are unfortunately not on display because of limited space). Deciding what to write about for the Journal is always a challenge for me because there is so much from which to choose. At times, however, my trestleboard clearly indicates that I need to write about a specific artifact. A water leakage in early June laid out the plans on said trestle board and guided my decision on writing about the gavel collection of John Henry Cowles.

John Henry Cowles served as Sovereign Grand Commander for 31 years (1921–1952), the second longest serving Grand Commander. During his term as the Grand Commander, Cowles actually lived in the House of the Temple. One of the more interesting aspects of Cowles is that he traveled extensively throughout the 1920s. During these travels, Cowles was gifted with gavels upon gavels; some of which are very interesting.

In the John Henry Cowles Gavel Collection, located in the basement of the Temple, there are 36 gavels of varying sizes. While each is interesting and has its own story, here are six of the more unique ones:

The above gavel was given to Cowles by the Grand Lodge of Egypt during his travels there. The gavel is made entirely from ivory of either an African elephant or hippopotamus. Cowles traveled in Egypt in 1926, so there were no laws in place prohibiting the sale/trade of animal ivory. 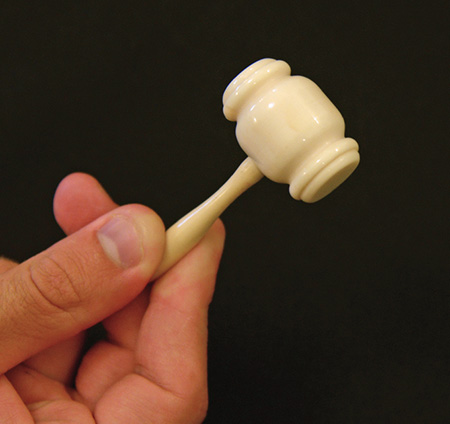 Another one is a miniature gavel that was made in Alaska. The length is about three inches and is made of ivory from the tusk of a walrus. This gavel would not be very beneficial in lodge, but it is adorable! 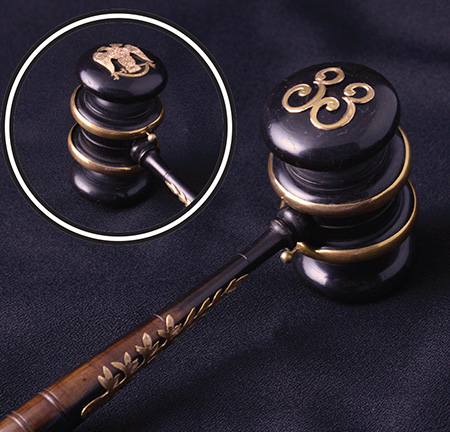 One of the more extravagant gavels is a wooden gavel that is detailed (gilded) with gold paint and gold metal. On one side of the head is the double-headed eagle. On the other is side is the 33° sign. The handle has a gold flower metal design. 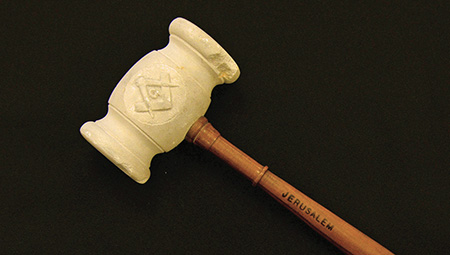 The above gavel is made from material taken out of the ancient subterranean quarry, which extends below old Jerusalem and is known as King Solomon’s Quarries. The head of the gavel is made of sandstone upon which is carved the square and compasses. The handle is made of genuine biblical Olivewood! 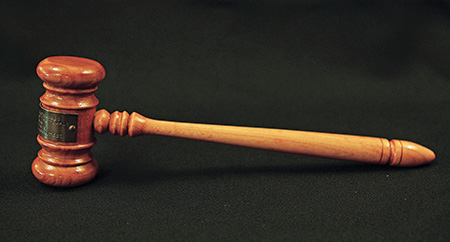 There is a gavel that is made from the materials taken from the House of the Temple Kimball organ that was installed in 1915. 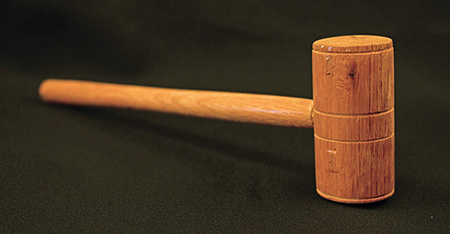 Not surprising, there is a gavel that was made from wood of Shepheard’s Tavern (the birthplace of the Supreme Council). The Citizens and Southern Company of Savannah, Georgia, presented Cowles with this gavel.

These are only some examples of the many gavels held and displayed in the Cowles Collection. The collection also includes a much larger gavel made from ivory from the tusk of an Alaskan walrus and one made from wood from an oak tree that was grown on the Guilford Battle Ground in North Carolina.

Unfortunately, some of the gavels have no indication of where Cowles got them. So, the next time you get a gavel made for your year or for a VIP, make sure you engrave or attach a metal plaque with the person’s name; date; location; and materials used. This way the gavel can be preserved properly for posterity. Who knows, one day your eclectic collection might end up at the House of the Temple!

The text of this article originally appeared in the September/October 2016 issue of The Scottish Rite Journal—available online and via the free app for Apple and Android devices, just visit your preferred app store and search “Scottish Rite Journal.”