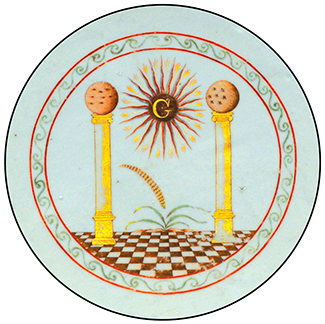 If you want to start a spirited discussion amongst Freemasons, ask them what they think of our Fraternity’s landmarks. If you want to squash that discussion, ask them what qualifies something to be a landmark. This is because, as Bro. Andrew Somerville McBride noted a century ago: “Among masons, there is no word more common, and less understood, than that of ‘landmarks.’ The importance of knowing them is acknowledged by all; a knowledge of them is held but by a few.”1 Let us not get caught up in merely reciting someone’s list of landmarks. That task has been performed admirably many times over the years. Some Grand Lodges have adopted Ill. Albert Mackey’s famous list of twenty-five landmarks,2 (see below for list) while others heed Ill. Albert Pike’s admonition that landmarks are very special, hence very few.3 Our nostrils might flare over a particular list so long as we admit our shortcomings, like Bro. Potter Stewart, a former Associate Justice of the U.S. Supreme Court who opined acerbically that he could not define obscenity, but he knew it when he saw it.4 The issue of landmarks is a critical one: unless we define them, how do we know Freemasonry’s core doctrines and practices? Landmarks are often intangible yet point to a hidden reality; without them, our fraternal identity is debatable and subject to irregularity. The answer lies in knowing what truly distinguishes Freemasonry from other fine organizations. Because Rev. Bro. George Oliver stated that landmarks may be modified as expediency dictates,5 we should heed our heritage but apply its lessons in the context of our Twenty-First Century experience.

Our Fraternity gives great deference to the Volume of Sacred Law, and the Bible plays a significant role for many American Freemasons. The Jewish historian Josephus records that the ancient Israelites erected stone landmarks to delineate the boundaries between family parcels and tribal territories.6 These monuments were man-made but revered for their divine inspiration: “Thou shalt not remove thy neighbor’s landmarks, which they of old time have set in thine inheritance, which thou shall inherit in the land that the Lord thy God giveth thee to possess it.”7 Similar stone markers were erected throughout the ancient world, from the Appian Way to Scandinavia. Other tangible things served anciently as landmarks too, from the Rubicon which separated Italia from Cisalpine Gaul to the ancient oak trees which the Domesday Book recorded as boundary points in Anglo-Norman estates. These examples teach us that landmarks have an inherent resilience that enables them to point reliably to what they represent, in order to delineate what is ours from what is theirs. It is difficult to know when the term “landmark” entered Freemasonry’s lexicon because the earliest known reference is found only in Bro. George Payne’s General Regulations of 1721. Bro. Payne was well-versed in Masonic tradition because he was twice the Grand Master of the Premier Grand Lodge, once in 1718 and again in 1720. Presumably he was nodding to that tradition when he wrote that the Grand Lodge “has the inherent power and authority to make new Regulations, or to alter these, for the real Benefit of this ancient Fraternity; Provided always that the old Land-Marks be carefully preserv’d.”8 Bro. Payne did not coin the term or define it, but apparently both he and his audience knew what the “old Land-Marks” were. Landmarks might have been depicted on tracing boards or discussed in lectures which have not survived, and Bro. Payne would not have mentioned them had his audience not understood his reference. Referring to other old texts allows us to make educated guesses as to what eighteenth-century Freemasons thought they were. If we consider the Old Charges,9 beginning with the Regius Poem (1390), we find common themes throughout Scotland, England, and the Continent that describe character traits which made Operative Masonry unique for centuries. Those same virtues should ring true to us today. They include being wise, strong, mannered, reverent, well-read, and honestly employed. Every lodge should be free from strife. Taking pay without murmuring, being a caring mentor, not coveting a brother’s wife or daughter, dealing uprightly with others, and being honest, faithful and diligent—all are examples of acting upon the square. Arguably they should be considered landmarks, not because they are the essence of Freemasonry, but because they point to the raison d’être of Freemasonry throughout history. It is disappointing that eighteenth-century Freemasons did not discuss landmarks more openly, unless their texts remain hidden in dusty libraries waiting to be discovered. For example, Bro. William Preston, a leading ritualist of his day, commented only that landmarks are found within the Master Mason’s obligation.10 Perhaps the reticence of our eighteenth-century forebears to be more forthright can be explained by the internecine warfare between Antients and Moderns which made any effort at fraternal consensus unbearable at best. Enter the unifying encyclopedic efforts of such mid-nineteenth-century Masonic scholars as Bro. Albert Mackey in the United States, Rev. Bro. George Oliver in England, and others who thought it was important to enumerate landmarks as a way to underpin a Masonic world-view. Bro. Mackey, a medical diagnostician, specified landmarks as a way to develop a clear and readily understandable jurisprudence that could explain Freemasonry’s existence to the rest of society;11 his list of twenty-five individual landmarks was itself a collectively singular landmark that distinguished Freemasonry from other Victorian groups. Rev. Bro. Oliver, an Anglican cleric, couched his list of landmarks in Biblical imagery in order to give spiritual impetus to the Fraternity’s purposes.12 As highly respected as these men were, and as laudatory their efforts, their enumerated lists have restricted value for twenty-first-century Freemasons. Many of the nineteenth-century lists were derived from romanticized allegories and their authors’ subjective biases, and were not grounded in rigorous historical analysis. While these lists still help to form the bedrock of our fraternal upbringing, they do not assist us in fully defining Freemasonry for our day because of an intellectual starting-point which is different from ours.

The Craft’s situation is as dire today as when the Antients and Moderns battled each other in the late 1700s, or when we rebuilt after the Morgan Affair in the 1800s, or when our membership plummeted in the 1930s. Our challenge today is how best to chart Freemasonry’s future, to know with a reliable degree of certainty that we are taking the Craft in the right direction while remaining faithful to our roots. Fish fries are fun, philanthropic causes are noble, and education and self-improvement programs are commendable. But other fine organizations offer these same attractions. If we wish to enjoy a mystic fraternal bond that makes us truly unique, a fresh analysis of landmarks may serve as our catalyst to discovering why and how Freemasonry is meaningful to the twenty-first-century world. One approach can be gleaned from the School of Pragmatism, whereby one studies past experiences dynamically both to explain one’s motives for current conduct and to set future goals, rather than looking at past events with “absolute standpoints based on theological or metaphysical suppositions.”  Pragmatism teaches that a clear understanding of why we chose to do certain things in the past allows us to understand better what we are yet capable of accomplishing. Let us recall, therefore, our first entrance into a lodge of Entered Apprentice Masons. That memory, be it intellectual or visceral, affected our decision whether to return for the next degree. Assuming the experience was positive, we returned on repeated occasions and proceeded through the Blue Lodge and perhaps other concordant and appendant bodies too. Hopefully those experiences were exponential, building upon each other and persuading us to seek yet further light and understanding. What made us want to be initiated originally? Such memories may be uniquely personal, but they can be discussed with others. By pondering both individually and collectively why we joined the Fraternity, we can appreciate why we are still involved today. Ideally, what we have experienced in our Masonic progression to date still should ring true for us today. What is it that causes us to continue as Masons today? As we discuss the lessons which we gained from those insights, we can express values and principles which serve as personal landmarks pointing to the ongoing essence of Freemasonry.

Our commitment to the Craft requires us to be active participants, not passive observers. By explaining the basis for our commitment, we thereby impart our enthusiasm and convictions to others who might be less confident, as well as help us to maintain the Masonic goals which we still expect to achieve. Those explanations, as we define them, constitute our landmarks. Our explanations may change, but the reasons should remain the same. Pragmatically speaking, that is what makes them landmarks. Endnotes 1. A. S. McBride, Speculative Masonry: Its Mission, Its Evolution, and Its Landmarks (Glasgow: D. Gillan & Co., 1914), 188. 2. Albert G. Mackey, “The Foundations of Masonic Law,” The American Quarterly Review of Freemasonry and Its Kindred Sciences, ed. Albert G. Mackey (New York: Robert Macoy, 1858–59): 230–43. 3. Albert Pike and Theodore S. Parvin, “The So-Called Antient Landmarks,” Proceedings of the Grand Lodge of Free and Accepted Masons of the District of Columbia for the Year 1983: Eighty-Third Annual Report (Washington, D.C.: John F. Shelby, 1894), 61. 4. Jacobellis v. Ohio, 378 U.S. 184, 197 (1964), concurring opinion. 5. George Oliver, The Freemason’s Treasury: Fifth-Two Short Lectures on the Theory and Practice of Symbolic Masonry (London: Bro. R. Spencer, 1863), 19–20. 6. Flavius Josephus, The Antiquities of the Jews, Book IV, Chapter VII, in William Whiston, The Genuine Works of Flavius Josephus, the Jewish Historian, Vol. I (New York: William Borradaile, rev. 1823), 249. 7. The Holy Bible (KJV), Deuteronomy 19:14. 8. James Anderson, The Constitutions of the Free-Masons (London: William Hunter) 1723), 70. 9. See, e.g., William James Hughan, The Old Charges of British Freemasons (London: Simpkin, Marshall and Co., 1872). 10. William Preston, Illustrations of Masonry (London: J. Williams, 1772), 203–8. 11. Mackey, The Principles of Masonic Law: A Treatise on the Constitutional Laws, Usages and Landmarks of Freemasonry (New York: Jonathan R. Neill, 1859), ix. 12. Oliver, The Historical Landmarks and Other Evidences of Freemasonry, Explained, Vol. I (New York: John W. Leonard & Company, 1846), 384–88. 13. Filipe Carreira De Silva, Mead and Modernity: Science, Selfhood, and Democratic Politics (Lanham, MD: Lexington Books, 2008), 9; Gary A. Cook, “George Herbert Mead,” A Companion to Pragmatism, ed. John R. Shook and Joseph Margolis (Malden, MA: Blackwell Publishing Ltd., 2006), 75. 14. Hans Joas, “Mead’s Position in Intellectual History and His Early Philosophical Writings,” Philosophy, Social Theory, and the Thought of George Herbert Mead, ed. Mitchell Aboulafia (Albany, N.Y.: State University of New York Press, 1991), 64. The above article will be published in two parts in the Scottish Rite Journal‘s March-April 2017 and May-June 2017 issues. 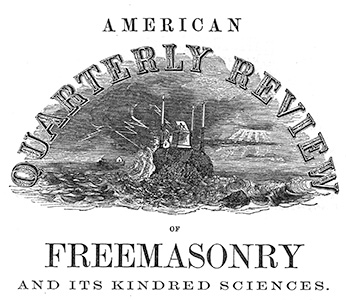 The Landmarks, or the Unwritten Law

Albert G. Mackey, 1858 From the American Quarterly Review of Freemasonry.
I Agree