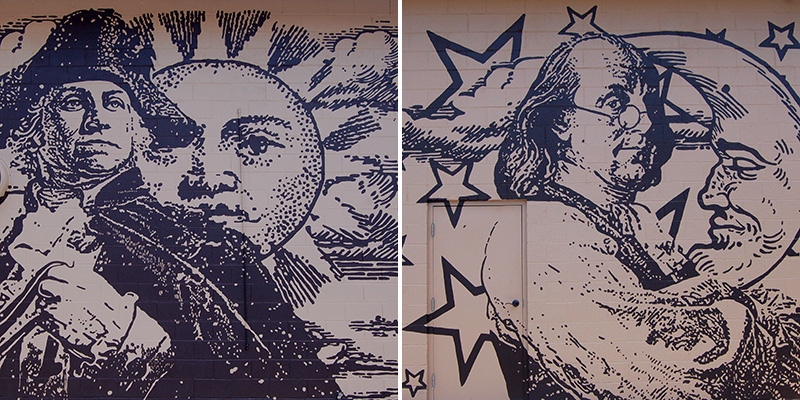 Above: Bros. George Washington & Benjamin Franklin are the two “revolutionary” Masons featured in Bro. Taylor’s mural, The Masters of the Revolution, located on the side of Grand Strand Lodge No. 392 in North Myrtle Beach, SC.(Photography: Photography: Bro. Brian Robert “Cat” Taylor, MM) “The students were excited to begin, and after some short instruction and a couple of hands-on demonstrations, the students moved quickly and meticulously through the work—stopping only to wave at passers by as an endless sea of appreciation poured out from the community. Under my supervision, the students worked both day and night to finish the 15’ × 70′ behemoth. “In the end, a public dedication of the work was a wonderful chance to praise the students for their momentous effort and allow the public to meet our close and extended family throughout the … Southern Jurisdiction. “I was asked by the Worshipful Master, if perhaps I might create another work that was as significant and glorious as the first. Without question, I accepted the charge.” Bro. Brian Robert “Cat” Taylor is a member of Grand Strand Lodge No. 392. He teaches the mural class each summer semester, and murals designed by him and his students dot the landscape around campus and the surrounding towns that make up SC’s Grand Strand beach communities. Grand Strand Lodge No. 392 is located at 919 6th Avenue in North Myrtle Beach, South Carolina. Additional Image Captions/Credits: Top: The Masters of the Revolution mural in its entirety on one of the walls of Grand Strand Lodge No. 392, in North Myrtle Beach, SC. (Photography: Photography: Bro. Brian Robert “Cat” Taylor, MM) This article originally appeared in the September/October 2017 Scottish Rite Journal—available online and via the free app for Apple and Android devices, just visit your preferred app store and search “Scottish Rite Journal.”
I Agree