By Kelly Manno |
House of the Temple Museum Intern

Salt is essential for human life, and it appears as a symbol in several Masonic rites. The unique vial of salt shown here is from House of the Temple’s collection. 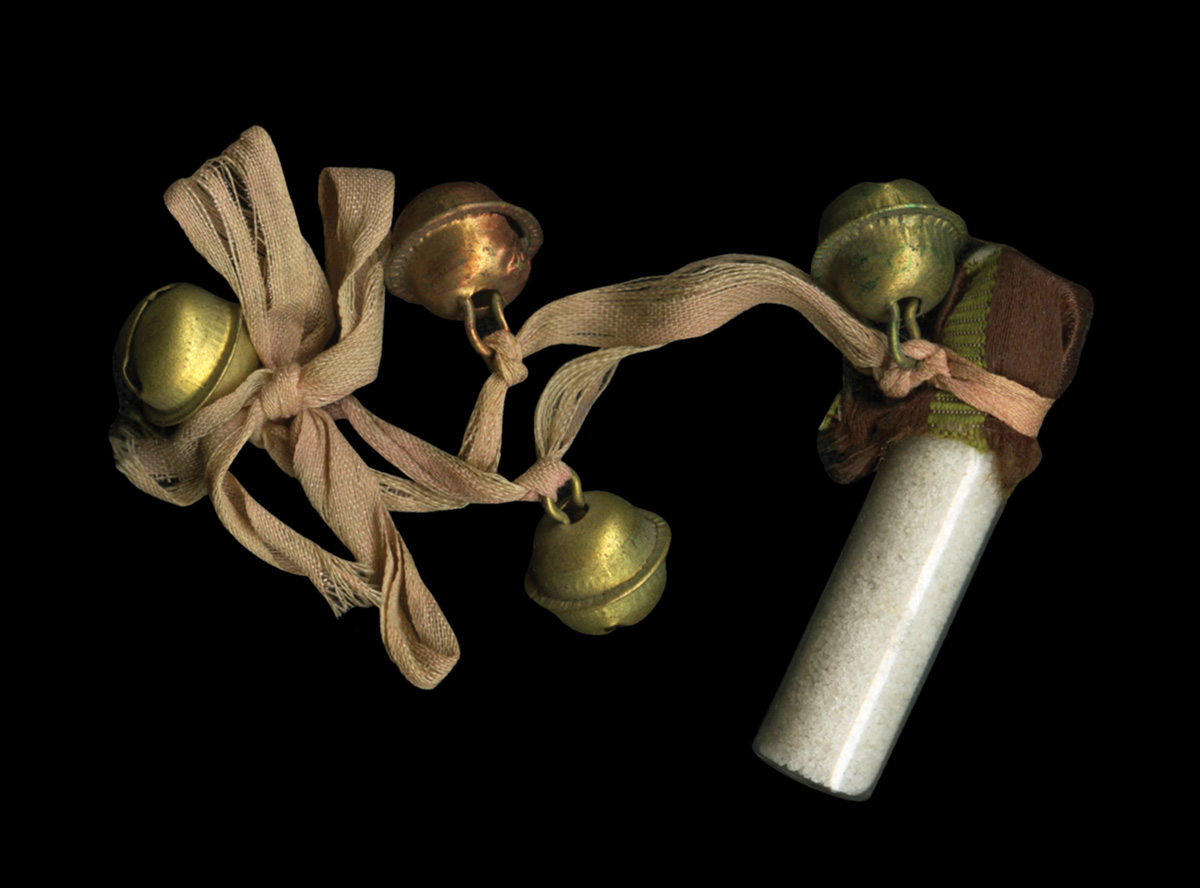 The Scottish Rite headquarters at the House of the Temple is steadily working to catalogue and documents its vast collection of Masonic memorabilia. In addition to United States Freemason pieces, we are discovering interesting and unique objects belonging to international bodies. These objects have histories that shed light on the dynamic nature of Freemasonry through the years.

We recently found a small glass vial filled with salt among the large collection of medals, badges, pins, and jewels at the Temple. It is ceremoniously wrapped in red, pink, and gold silk ribbons. There are four small brass bells tied to the ribbons. It is a unique piece unlike anything we have previously come across in our cataloging. Deeper research was required to understand how it relates to Freemasonry.

The history of humans and salt is a long one. It is theorized that the earliest human cites were determined in part by the proximity of natural salt deposits; this essential nutrient that had been obtained from a meat-heavy diet was lacking in the domesticated grain-based diet of settlements. Immediately, salt was a valuable commodity, and the demand for it was insatiable. Salt is a preservative, allowing humans to store excess meat for when fresh meat is unattainable. It was not uncommon to be paid in salt, spawning the phrase “worth your salt” and forming the basis of the word salary. Salt was also used medicinally. Ancient Romans used the mineral as an antiseptic to clean wounds. The mineral naturally became imbued with perceived power. Symbolic elements were introduced to Masonic rituals in the 18th century. The Grand Orient of France began placing vials of salt in their Chamber of Reflection in 1785 because of its association with purification.

The Scottish Rite, French Rite, and Brazilian Rite call for their potential members to spend time in a room known as the Chamber of Reflection. This room, often small and painted with black walls, is where petitioning members are asked to reflect on their character and intentions prior to their initiation. Traditional Chambers of Reflection can house ceremonial objects including a skull on crossbones, a piece of bread, a pitcher of water, a candle or lantern, an hourglass, paper, ink and pen, a wooden stool, wall paintings of a rooster and sickle, the acronym V.IT.R.I.O.L.(U.M.), and three alchemical elements: sulphur, salt, and mercury. Sulphur represents the spirit and masculinity, mercury represents light and femininity, and salt represents wisdom and gender neutrality. While these are the traditional objects, lodges may choose to modify them in some way.

And while we know much in general about how salt was used in Masonry, this vial in particular remains a mystery (among many) in our collection. It is part of Masonic tradition, but we don’t know from what country or what rite it came. We don’t know its owner or when it was used. It remains a mysterious and beautiful artifact of the Craft, awaiting the discovery of some identifying information while it silently tantalizes us.