The Freemasons’ Monitor; or Illustrations of Masonry: In Two Parts by Thomas Smith Webb, was first published in 1797. Webb, born in Boston, Massachusetts, in 1771, first became a Mason in 1790 at the Rising Sun Lodge and went on to become a prominent ritualist and lecturer.  Webb’s Monitor was the keystone of American Masonic ritual and left a lasting influence, particularly in the York Rite. The Freemasons’ Monitor is written in two parts and includes the “Ineffable Degrees of Masonry,” “History of Freemasonry in America,” as well as a number of  Masonic songs (see photo below) written by Webb himself. The Supreme Council Library owns not only a first edition, but numerous subsequent versions of Webb’s Monitor. Enhanced editions of Webb’s original Monitor followed in 1802, 1805, 1808, 1816, 1818, with numerous editions after the author’s death. This book is very rare and is a precious part of the Supreme Council Library collections. —From Jeri E Walker, A Guidebook to the House of the Temple: The History, Architecture, & Symbolism (Washington, DC: Supreme Council, 33°, SJ, USA, 2015) 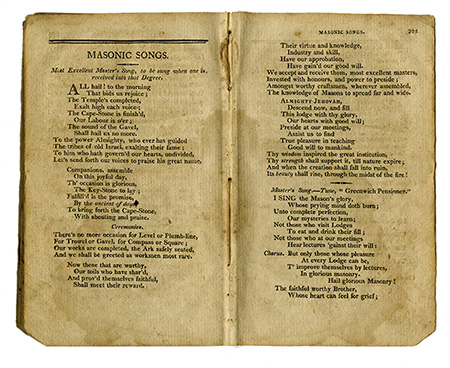