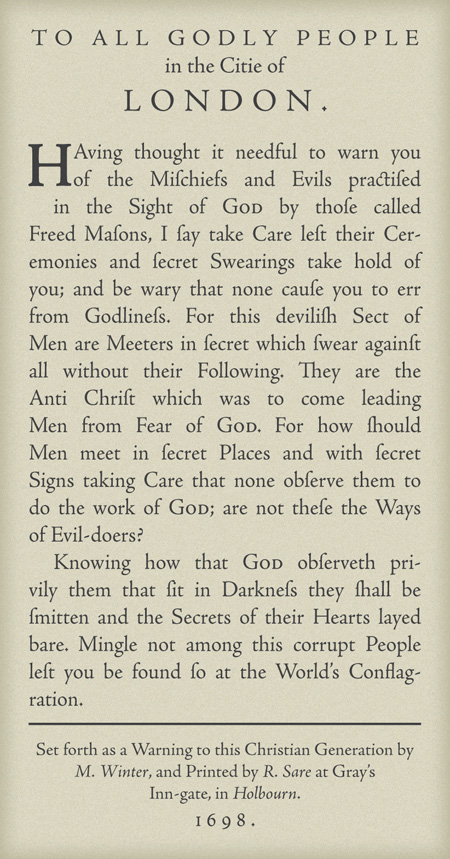 Graphic: Broadside distributed by a “M. Winter” containing two “charges” against the fraternity. (Retypset from the original in the Library and Museum of Freemasonry, London) John Wycliffe (1330–1384), the reformer and translator of the Bible into English, attacked Freemasons in 1383 on economic—not religious—grounds, for behaving like a trade union. “For they conspire together that no man of their craft shall take less on a day than they set…. And that none of them shall do ought but only hew stone, though he might profit his master … by laying on a wall….” In other words, Freemasons would not work for less than the set wage and they, as hewers of stone, would not take on work of another craft, the layers. Wycliffe, however, had no religious concerns with Freemasonry. The first published religious attack appeared much later in 1698, nineteen years before the Premier Grand Lodge was formed in London in 1717. (This, by the way, is nice evidence that there was enough Masonic activity in London in 1698 for a warning to be issued.) The text that follows is from a leaflet distributed by a “M. Winter” that contained basically two charges against the fraternity. First, the members swear oaths “against all without their following” and presumably to support each other. Second, Freemasons have secret signs and are “meeters in secret,” which are the “Ways of Evil-doers.” —From the November/December 2010 Scottish Rite Journal
I Agree